Ready to join the Chorus?

Get more information on how to audition.

Robert Taylor is Director of the Charleston Symphony Chorus and CSO Chamber Singers, and the Director of Choral Activities at the College of Charleston. He is also the Founding Music Director of the Taylor Music Festival and Taylor Festival Choir, a semi-professional choir recently honored to perform at the 50th Anniversary of the American Choral Directors Association (ACDA) convention in 2009. Described by the Charleston Post and Courier as a conductor whose work is “expert,” Taylor’s choirs have been praised for their musicality, technical proficiency, and beautiful sound production. 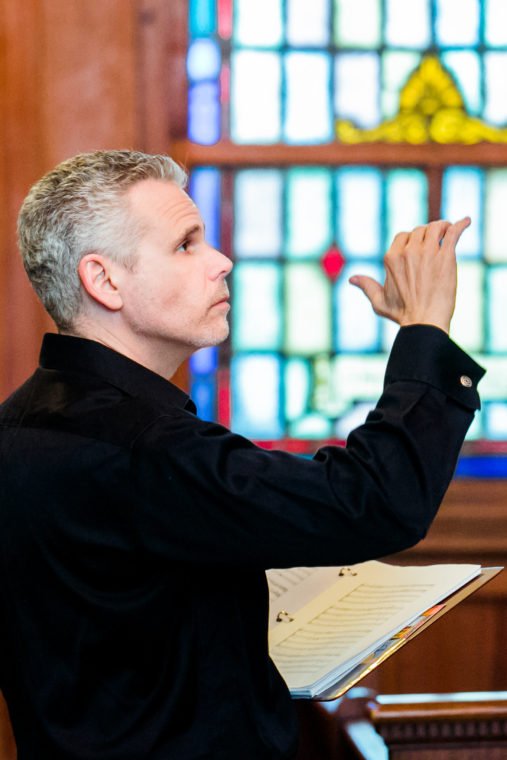 Dr. Taylor has been at the College of Charleston since 1998, where he conducts the acclaimed 48-voice Concert Choir and the 18-voice Madrigal Singers, and where he teaches conducting, choral literature, music appreciation, and studio voice. Since coming to Charleston, Dr. Taylor’s collegiate ensembles have performed throughout the Southeast, Great Britain, and Ireland.

Dr. Taylor’s college choirs have performed at a number of festivals and conventions, including the 1999 American Choral Directors Association South Carolina Convention, the 2001 Paw Icy’s Island Festival of Music and Art, and in numerous performances in the Piccolo Spoleto Festival, including an All-Stephen Paulus Concert with the renowned composer in attendance on the festival’s Choral Artist Series. They have also been selected for feature performances in the 2003 American Guild of Organists Region IV Convention, and in the 2003 South Carolina Music Educators Convention.

Dr. Taylor is also Music Director of the Bob Taylor Music Festival in Little Rock, Arkansas, and the festival’s resident professional choral group, the 28-voice Bob Taylor Festival Choir. This ensemble has performed throughout the Southwest, and was the featured ensemble in the 2002 Oklahoma Choral Directors Association Convention. Already regarded by many choral specialists as one of country’s finest chamber choirs, The Bob Taylor Festival Choir and Dr. Taylor recently signed a recording contract with the Centaur Classical Recordings label. Their first recording is scheduled for release in 2005.

Prior to coming to Charleston, Dr. Taylor served as Associate Director of Choral Activities at the University of Central Oklahoma, where his Concert Choir was named an Honor Choir by the 1997 Oklahoma Music Educators Association and featured at that organization’s 1998 convention. While at the University of Central Oklahoma, he conducted productions of Bernstein’s Trouble in Tahiti, and Menotti’s Amahl and the Night Visitors and Help! Help! The Globolinks.

From 1993–1995, Dr. Taylor served as Founding Music Director and Conductor of Chorus Civitas of Baton Rouge, Louisiana. This choral/orchestral ensemble’s recording of Vaughan Williams’s Epithalamion and An Oxford Elegy on the Centaur label was favorably reviewed by the American Record Guide and Fanfare magazine—Fanfare declaring the recording “a highly accomplished performance” and stating that “Taylor and his forces capture the ebb and flow [of Vaughan Williams’ scores] perfectly.” During this time, Dr. Taylor also served as Music Director and Principle Conductor of the Baton Rouge Gilbert and Sullivan Society, where his conducting credits included the Mikado and Ruddigore.

Dr. Taylor began his conducting career in the Texas public school system, as he directed the choral program at Cleveland High School in Cleveland, Texas, from 1991–1993.

Dr. Taylor is an accomplished choral scholar, clinician, and lecturer, having been featured in these capacities in Texas, Arkansas, Louisiana, Georgia, and South Carolina. His study of Ralph Vaughan Williams’ cantatas An Oxford Elegy and Epithalamion is the first detailed, extended analysis of these works, and the Choral Journal has published his study of Stravinsky’s Symphony of Psalms. As a lecturer, Dr. Taylor recently presented “Bel-Canto Principles Applied Within a Choral Setting” at the 2000–2001 American Choral Directors Association South Carolina Convention, and led a special session on secondary-level choral rehearsal techniques at the 2001 South Carolina Music Educators Association Convention.

Dr. Taylor holds a Doctor of Musical Arts in Choral Conducting degree from Louisiana State University, a Master of Music in Vocal Performance degree from Sam Houston State University, and a Bachelor in Music Education degree from the University of Central Arkansas. He has studied conducting with Dr. Kenneth Fulton, the late Dr. B.R. Henson, John Erwin, and his late father, Bob Taylor. He currently serves as the South Carolina American Choral Directors Association Repertoire and Standards Chair for Community Choirs.